According to the preliminary data of Statistics Estonia, on 1 January 2021, the population of Estonia was 1,329,460 persons, which is 480 persons more than at the same time a year ago. Population decreased by 2,590 persons due to negative natural increase and increased by 3,070 persons as a result of positive net migration.

Ethel Maasing, leading analyst at Statistics Estonia, said that there were still more deaths than births last year. “Natural increase remained negative. The main reason is that there is a large share of older persons in the population and the number of women in childbearing age is decreasing. Although the number of births decreased significantly, the population figure still increased thanks to positive net migration: 3,070 more persons moved to Estonia than left for abroad,” said Maasing

The spread of the coronavirus also has an effect on the number of births and deaths and migration. According to Maasing, the impact appeared quickest in migration, because countries considerably restricted immigration due to the virus. “The spread of the coronavirus definitely had an impact on both births and deaths, but it is still early to say to what extent. Countries have adopted different strategies to control the virus and, at the moment, it can be said that the choices made in Estonia haven’t so far caused a sharp increase in the number of deaths,” added Maasing. 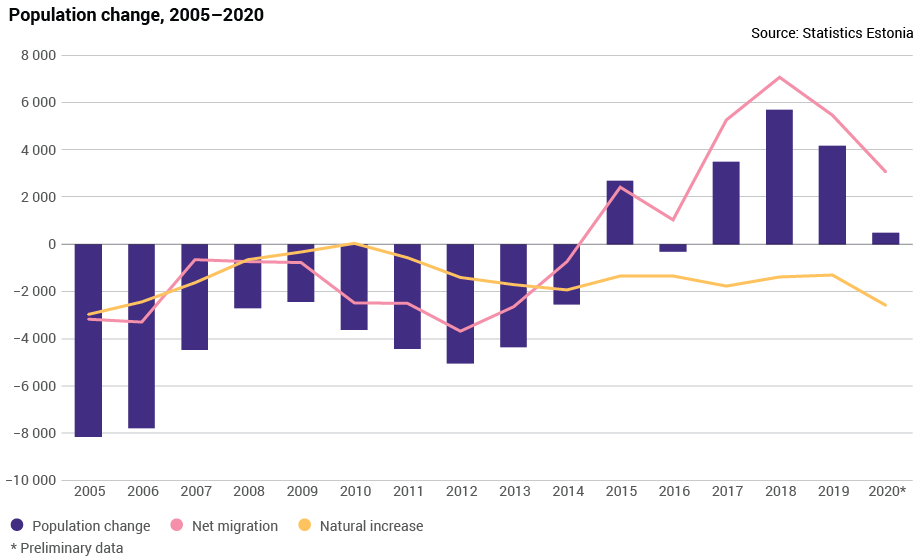 There were 15,720 deaths in 2020, which is 300 deaths more than the year before. In recent years, the number of deaths has been in the range 15,200–15,800. “The number of people who died was highest in December, totalling slightly over 1,510. As a rule, this many people die in winter months when there are extreme weather conditions. We can analyse the causes of death in more detail at the end of spring,” added Maasing.

“Migration statistics are the most difficult to estimate based on preliminary data. In the spring, we’ll supplement migration data with population register data and data on unregistered migration,” said Maasing. Migration flows increase when unregistered migration calculated on the basis of other registers is added to registered migration, because Estonian and other EU citizens do not register moving out of the country. This is the main reason for the increase in emigration. Immigration increases primarily because the same people move back, which is not reflected in the population register, as their leaving was not previously registered.

The preliminary population number is based on the initial data on births, deaths and registered migration of the previous year. Statistics Estonia will publish the revised population number with revised vital events (migration, births and deaths) on 12 May.