A population and housing census is the collection, analysis and aggregation of data with a precise census moment in order to determine the composition, location, economic and social distribution, etc. of the population.

Who conducts the census?

In Europe, the statistical office of the European Union, Eurostat, coordinates population and housing censuses. Eurostat obliges Member States to carry out a population census in a given year and determines a precise list of mandatory output characteristics and their format, in order to ensure the comparability of data across Member States.

In Estonia, the census is conducted by Statistics Estonia.

The census moment for the Estonian population and housing census 2021 is 31 December 2021. The data collected in the census must be reported as at the census moment, regardless of the time and mode of response. Data collection will take place in early 2022.

This means using data from state databases, i.e. registers, and requesting data directly from people in order to obtain information that is not available in registers. The dataset or census characteristics for which data are collected in the census have been fixed in the Official Statistics Act and Regulation 763/2008 of the European Parliament and of the Council.

Estonian registers are of high quality but lack data on self-reported information (‘additional characteristics’): religion, existence of health problems and their impact on a person’s normal activities, knowledge of foreign languages. There is also a lack of accurate data on the difference between actual and registered place of residence resulting from inaccurate residence data in the population register.

At present, it is still undecided how to obtain data on the characteristics missing in the registers (‘additional characteristics’), and there is a choice of two combined methods for organising the census:

1) a combination of a register-based census and sample surveys;

2) a combination of a register-based census and a standard census.

In the case of applying sample surveys (option 1), approximately 60,000 people will answer the questions regarding additional census characteristics, while a standard census (option 2) covers the total population (1.3 million). Both census methods are allowed under the European Union Regulation and ensure high quality results for all census characteristics at local government level. The Statistical Council approved by the Government of the Republic recommends conducting the census as a combination of register-based census and sample surveys.

Statistics Estonia will decide on the census method in 2020.

The development of registers is necessary

Getting people to participate in the census is a global problem, which is solved by register-based census, where the registers are cross-used to obtain data that are more accurate. According to the European Commission’s draft legislation, from 2024 onwards, all EU countries should carry out a census every year, so the use of registers in Estonia’s combined census in 2021 is justified, as is the future transition to a fully register-based census. Investments in registers are essential and the development of registers is also important.

The preparatory work for the 2021 census has been carried out at Statistics Estonia over a decade (2010–2019). The total cost is almost 16 million euros, half of which has been used in ministries to develop registers and improve data quality. The census work will continue in 2020–2023 and will end in 2024 when all census results have been published.

What is meant by using registers in the census?

This means using the information that has been submitted in state databases, i.e. registers.

Statistics Estonia has carried out methodological and information technology preparatory work since 2010 to use data from registers in the 2021 Population and Housing Census. A pilot survey (in 2014) and two pilot censuses (the first in 2016 and the second in 2019) have been carried out to evaluate the method.

Results of the first pilot census 2016 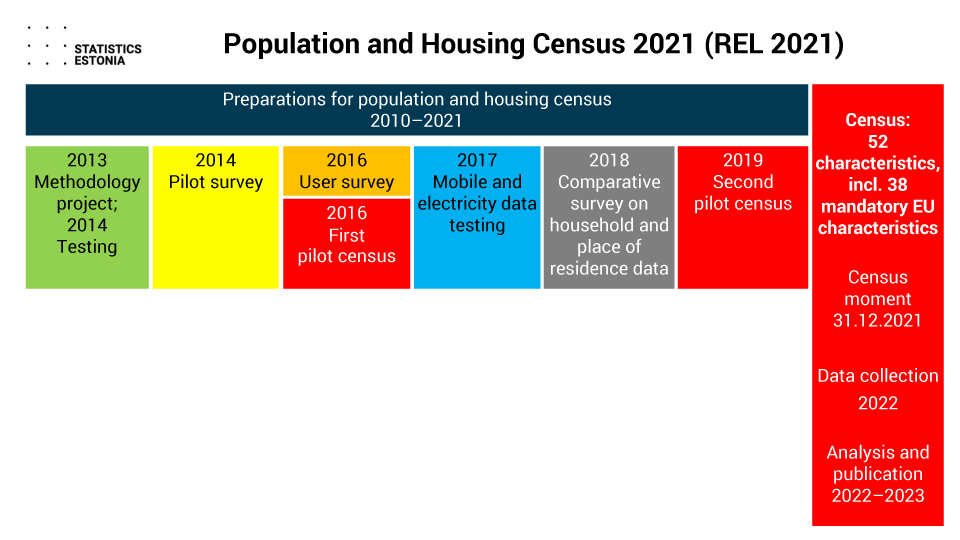 Estonia has a good system of national registers with data on all residents and dwellings in Estonia. It is natural to use these data for conducting the census, as well as in other national statistical activities.

In organising the 2021 census, Statistics Estonia cooperates with at least 24 registries. In addition to the main registers – the population register, the registers of the Land Board, the Tax and Customs Board and the Health Insurance Fund – information from other state databases is used to complement and improve the accuracy of the results.

What should be done in databases?

Databases play an important role in a register-based census. The administrator of each database shall ensure that the dataset is complete, containing all the data required by the statutes of the database. All data must be accurate, complete and up-to-date. The register-based census requires a secure and operational data exchange platform. Estonia uses the internationally recognised X-Road, which was developed in Estonia.

Cooperation in preparation of the register-based census contributes to the data quality of all databases, making the use of these databases more efficient for the benefit of society.

State databases for the 2021 census

Population and Housing Census in 2011

Estonia’s first register-based trial census
Did you find what you were looking for?