According to preliminary data of Statistics Estonia, in 2013 the Estonian general government deficit was 0.2% and the gross debt level was 10% of the Gross Domestic Product (GDP).

In 2013, both the levels of the general government’s total expenditures and revenues were 3% higher than a year before. Returns from taxes to the general government budget were 5% higher. For the second consecutive year, revenues from the personal and corporate income tax increased the most (15% in total). Property income underwent a significant fall (decrease of 16%), mostly due to a decrease in dividends. The foreign aid revenues lessened significantly over the year, but for this change it is important to notice the high level of income in 2012 – in 2013, the foreign aid revenues accounted for 405 million euros, 506 million in 2012 and 432 million euros in 2011. There was a considerable change in investments – in 2013, the general government sector spent 154 million euros less for investments than in 2012.

The Estonian involvement in the European temporary rescue mechanism, EFSF (European Financial Stability Facility) increased by 104 million euros in 2013. At the end of 2013, the liabilities towards the EFSF totalled 458 million euros, of which 80% went for the participation in the rescue package for Greece, 11% for Portugal and 9% for Ireland.

The overall debt level of the local governments grew by 12% compared to 2012. The volume of both short-term and long-term loans increased (15% in total), including the 12% of the loans financed by foreign capital. The volume of the securities other than shares increased slightly as well (7%). Similarly to 2012, social security funds did not contribute to the general government sector debt as at the end of 2013 either.

Surplus/deficit and debt level of the general government in Estonia, 2007–2013 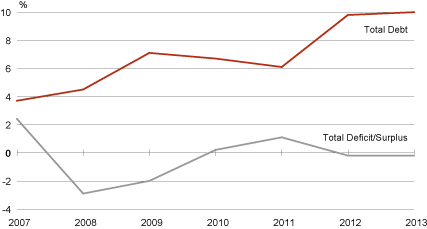 Eurostat is going to publish the data on the preliminary debt and deficit levels of the Member States on 23 April.