As part of the census survey, people were asked if they had any long-standing illnesses or health problems. “It was irrelevant whether or not a disability or reduced capacity for work had been determined. What mattered was the person's assessment. It was also asked to what extent the person had felt limited in some of the daily activities because of a health problem in the past six months,” explained Liina Osila, Population and Housing Census project manager at Statistics Estonia.

The results of the 2021 census show that a third (33%) of Estonia’s population have a long-standing illness or health problem. This figure was slightly lower – 31% – at the time of the previous census in 2011.

Share of older people limited by health problems has decreased

The biggest positive change is that in the oldest age group (65 and over), there has been a significant decrease in the proportion of people who feel that health problems severely limit their daily activities, from 39% in 2011 to 24% in the 2021 census. “The fact that older people, despite their health problems, do not feel significantly limited in their daily lives shows that, in addition to good health services, our society is increasingly attentive to different needs, and this allows people to live a full life even with health problems,” said Osila.

35% of women said they had a long-term health problem, while the figure was lower for men – 29%. This was also the case in the previous census (33% for women, 28% for men). “However, if we observe the gender gap by age groups, a significant difference is only seen among those aged 65 and over. The figures for younger age groups remain similar to before. It should be noted that the average life expectancy of women is also somewhat higher, which is why there are more women than men in the older age group,” Osila explained.

Prevalence of health problems is highest in Põlva and Ida-Viru counties, lowest in Harju county

The largest share of people with long-standing health problems is found in Põlva and Ida-Viru counties, where 42% of people live with long-term health issues, which is almost 9 p.p. more than the Estonian average (33%). These figures were of the same order of magnitude in the previous census as well (43% in Põlva county, 39% in Ida-Viru county).

Inhabitants of Harju county are the healthiest, with 27% estimated to have a long-standing health problem. This is nearly 6 p.p. less than the average in Estonia. However, compared with 2011, the percentage has increased slightly in Harju county as well (2011: 25%). 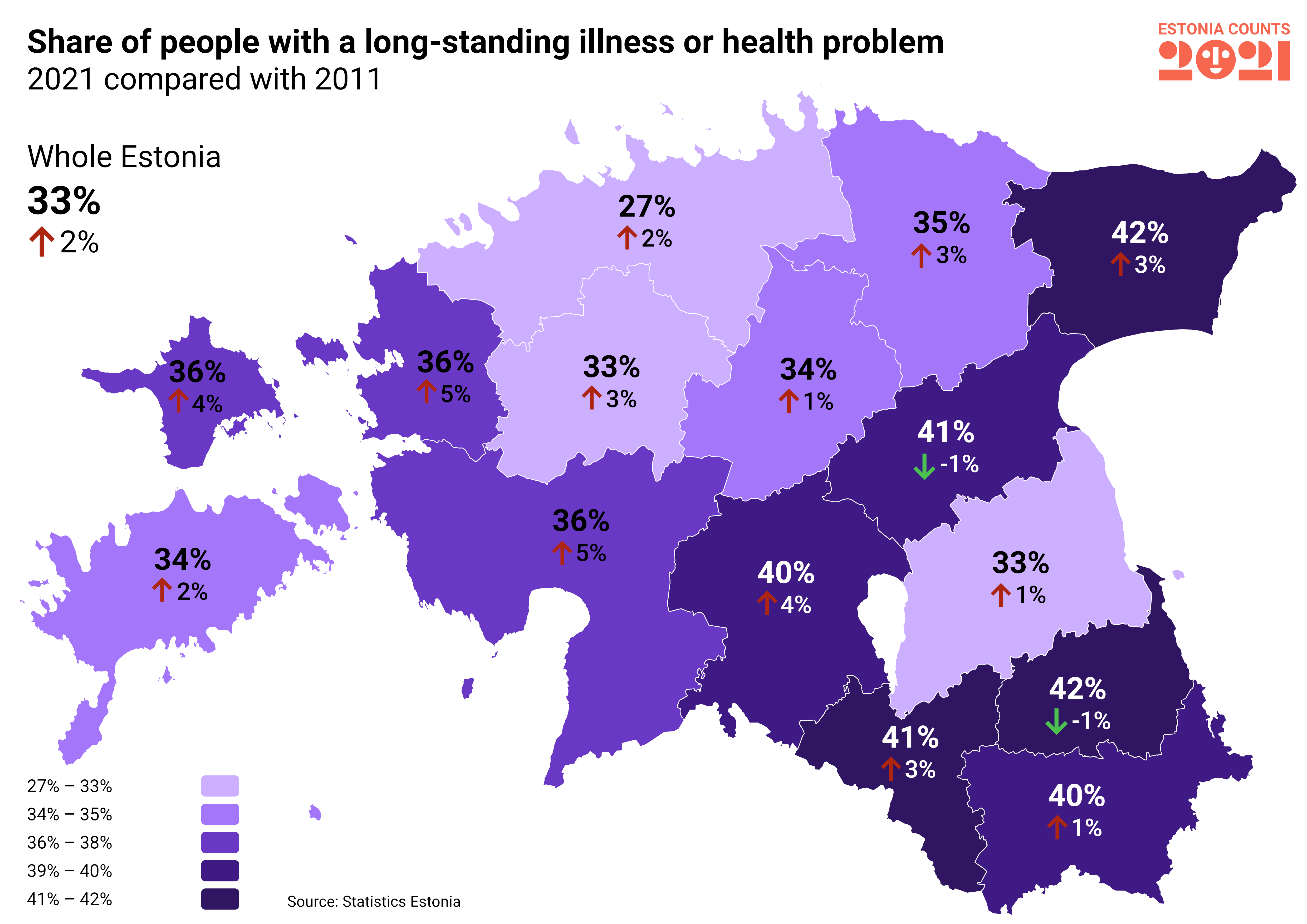 People with higher education have the fewest health problems

The census results also highlight the link between educational attainment and health status, which has been confirmed in previous studies[1]. “Looking at how educational attainment relates to health, it turns out that people with higher education have the lowest rates of long-term illness or health problems,” Osila noted.

Information on the state of health was collected through the population and housing census survey from the end of 2021 to the beginning of 2022. Specifically, people were asked whether they had a long-standing illness or health problem, and to what extent they had been limited in some of the usual activities of daily living because of a health problem in the past 6 months. Social constraints resulting from the COVID-19 pandemic were not included. An illness or health problem is considered long-standing if it has lasted for 6 months or is expected to last for at least 6 months. Both mental and physical health are meant here. Information on the nature of the health problem was not collected in the census.

Nearly half of the total population of Estonia participated in the survey and the breakdowns were calculated taking into account the people who refused to answer the question. The aim of the survey was to find estimates for the questions asked. A more detailed description of the survey can be found in the methodology document.

For more information on the health of Estonia’s population collected during the census, visit rahvaloendus.ee. The data are published in the statistical database.