Immigration offset the high number of deaths; the population increased

Terje Trasberg, leading analyst at Statistics Estonia, said that last year stands out for an exceptionally high number of deaths, as there were 5,315 more deaths than births registered in 2021. “The high number of deaths combined with the number of births, which was similar to the level of recent years, meant that natural increase was negative. On the other hand, net migration was again positive –7,043 more persons moved to Estonia than left for abroad. All in all, Estonia's population increased by 1,728 persons or, figuratively speaking, by the number of people living in the borough of Kiili." 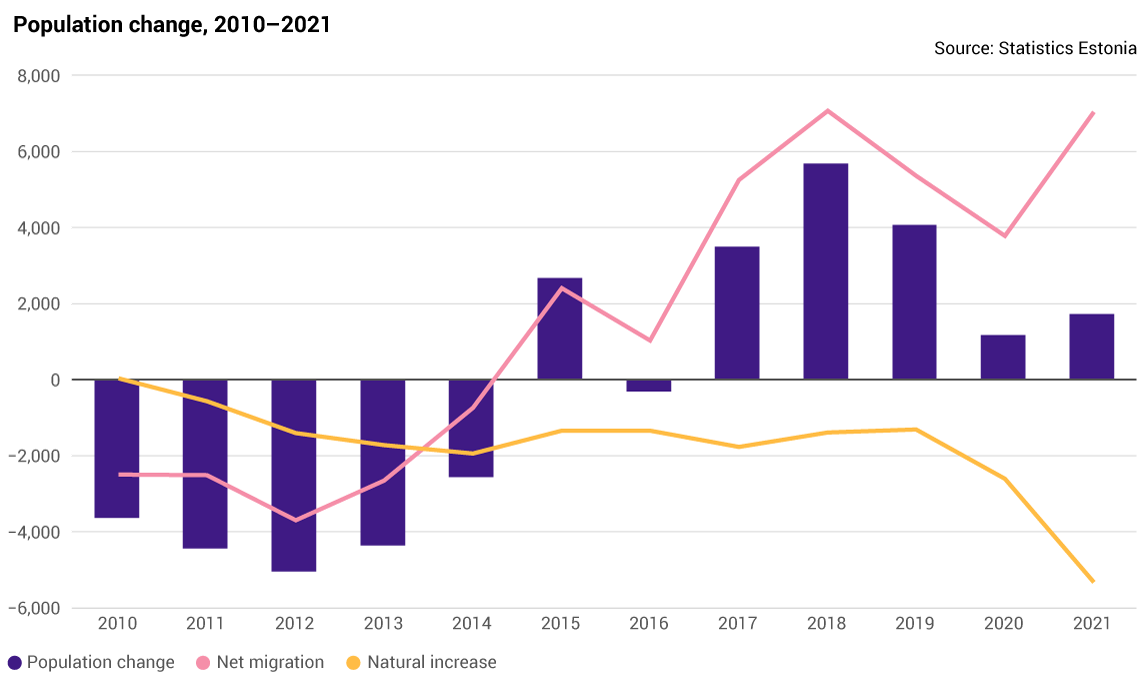 There were 18,587 deaths 2021. In the last ten years, the number of deaths has ranged between 15,000 and 16,000, and the difference from year to year has been around 300. “The number of deaths registered last year was extraordinary – the last time mortality was this high was in 1997,” added Trasberg.

In 2021, 19,524 persons immigrated to Estonia and 12,481 persons emigrated from Estonia – arrivals outnumbered departures by a third and net migration remained positive for the seventh year in a row. Most of the migrants were Estonia’s own citizens, whose net migration was positive again after a one-year break. The majority of the immigrants arrive from Finland and Ukraine and most of the emigrants depart for Finland.

Census data will be published on the 1st of June

From June 1, Statistics Estonia will begin publishing the results of the 2021 population census. The census data are used to determine, among other things, how the average age of women at first childbirth has changed over the past 20 years, what percentage of the population identify as Estonian in terms of ethnicity, which languages are spoken as mother tongue in Estonia, and how the percentage of people not born in Estonia has changed over the past two decades.